Here are some highlighting results and fun facts from our travels and competitions around Canada and the States so far!

The season kicked off with a blast of early season West Coast Dirt. The RMCC team spent 2 weeks scrubbing dirt on the coast. They began in Victoria where the athletes raced Canada Cup number 1, a field of stiff competition where nearly 50% of the riders in the Junior field were from the States. Strong results were posted with Logan Sadesky snagging 16th spot, 6th Canadian. Jack Menzies in 29th and Eva Poidevin in 5th, 3rd Canadian.
The riders raced clean and the coach Brittany was happy to report the no mechanicals that day thanks to this guy:
Thank you, Stephanie O’Brien and Stefan Bullock for keeping our hubs clean and ready to rip!
After crushing multiple bags of Easter chocolate to bide ferry time, the team went down to Chilliwack with guest riders Evan Guthrie, Ricky Federeau and Team BC. The daily grind consisted of 1000-2000m of climbing, followed by equally long, loamy descends and burmed corners. Lots of mud, laughs, and laundry, and we sent the riders home happy and tired, with only a few saddle sores to report.
The team then headed over to the other end of the country to compete in Quebec for Canada Cups 2 and 3. Again, stiff competition from all over North America hit the start line. The racers were ready, but this time the team wasn’t so lucky with equipment.
The Junior men’s field took off like rockets, and for the entire race, the top 2 juniors posted faster times the winner elite men!! Logan and Jack were right in the mix, but the boys hardtail bikes struggled to flow in the gnarly rocks and roots course. As luck would have it, Logan had a chain jam coming into the feed zone. He had to run a few hundred metres. It was a fairly quick fix, but he lost 6 positions which unfortunately he wasn’t able to make up.
Overall results that day were Logan in 16th (8th CDN), Jack in 24th (15th CDN). In the women’s field, Eva Poidevin smashed the short track race, coming 6th overall with the Elite and Jr field combined! She was 2nd Junior woman on the day. Our featured photographer (AKA Brittany’s dad) and feature cowbell ringer (AKA Brittany’s mom) gave a little extra boost of energy to the riders as they pushed hard up the climbs.
On the trip were also Canada Cup series Elite leader, Jenn Jackson, and 2nd place overall Elite man, Evan Guthrie. These two were huge assets on our team. They helped to mentor, motivate and demonstrate just exactly how being a top rider in the country is done. Here is Jenn fighting hard for a second place finish to Maghalie Rochette of the Cliff Pro Team. 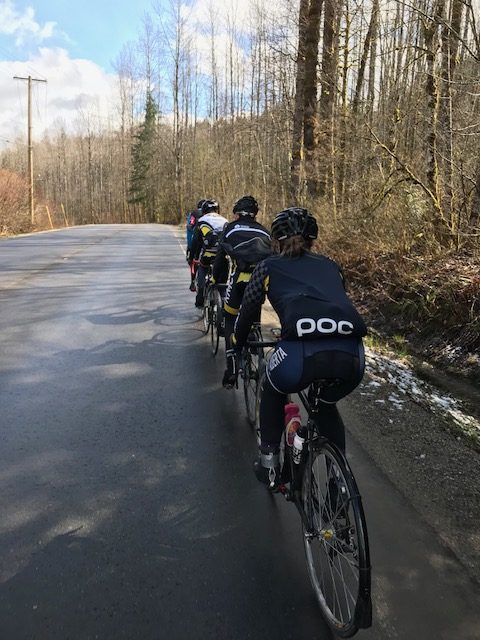 After 1 week in Baie St Paul, the team loaded up the van and headed for Mt Tremblant for CC#3. A field of 44 Junior men and 13 Jr women took to the start line. A big crash took place right out of the start gate in the Junior men. Jack was caught up in traffic a bit but managed to ride around without losing too much time. Logan had a great start. He passed the tech zone in 14th place and picked off 5 guys by the top of the climb! He was riding in the top 10 when he crashed in a creek trying to pass a rider. Then his chain broke and he had to run nearly 2km back to the tech zone!
Evan just so happened to be standing at the bottom of the climb when Logan came running through. He sprinted up the climb to the tech zone and met me just in time to make a plan. Here’s Logan trying to relax and drink while Evan and Mike Charuk pitch in to help! Thanks, guys! 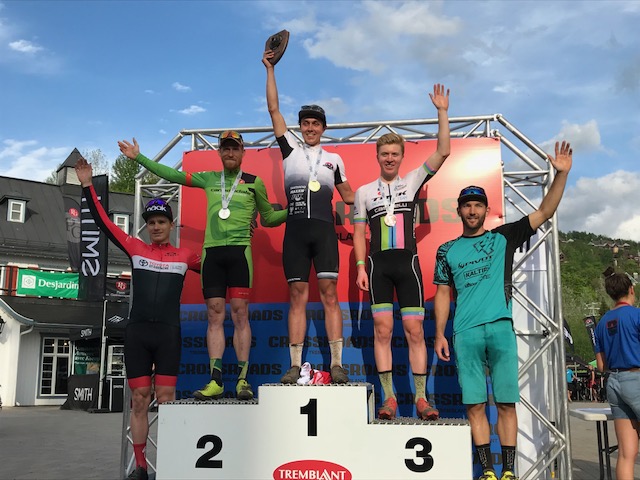 Although Logan had a stroke of bad luck, Jack and Eva took it for the team that day! Jack posted a stellar finish in 22nd and Eva was on the podium in 4th place! 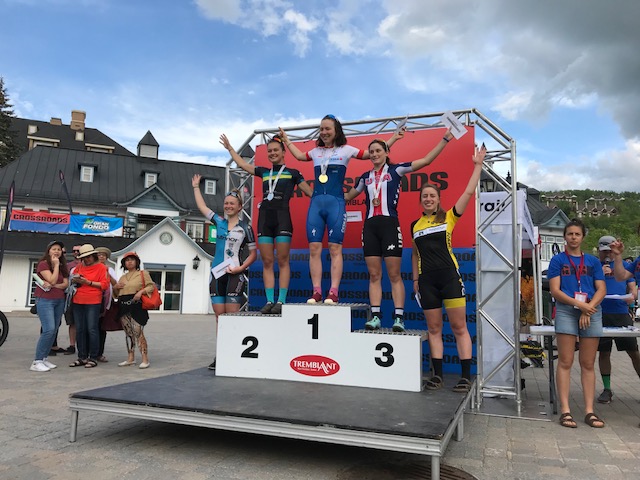 This last weekend, Logan and Eva went to Missoula MT to compete in a US Jr Pro Series race and posted some astonishing career-best results.
Logan was 9th and Eva 2nd! WOW! Congratulations you two!
Jack went to the Kamloops Enduro and had an equally outstanding performance where he was 5th!
Coach Brittany is enjoying watching the athletes succeed and the RMCC programs grow. The joint Junior/masters programs that run Monday through Wednesday have the riders participating in Strength and conditioning with SC2, mountain bike skills sessions and coached road cycling practices. The Mountain Maiden and RMCC Road races during the past 2 weekends allowed several riders in the program to get on the start line together!
Logan Zenert and Tiegan De Leeuw won both their categories at the MTB XC last Saturday.  Coach Brittany even came out herself for a little action in the women’s elite race and captured the win. In the Road Race, Logan had a spectacular hill climb, Erin Wilson was 2nd overall in the 3/4/5 women’s Omnium, Marcy Schmidt 1st Womens 3/4/5 Hill Climb, Stephanie O’Brien 3rd women’s Cat 3/4/5. Brittany was 3rd in the women’s Cat 1/2 Crit and Hill climb and enjoyed finished it off with some course takedown where she and Tazman took turns sprinting for delineators and catching a ride on the side of Shane’s — what is that thing called— Jeep? mobile??
RMCC-R Express team member Sean Parker shone that weekend. After nearly 1.5 years of being injured and out of racing, he completed his first entire weekend of racing since injury!! He impressively rode to 8th place in the cat 3 men’s crit.

RMCC is hiring. RMCC is looking for coaches for our Rampage program. This is our XC ride and race program. The program runs twice a week from 5:30-7:30. If you are interested in Coaching with this program please email rampageryanrmcc@gmail.com. For more information about this program please see our website.https://www.rundlemountaincyclingclub.com/rampage/ ... See MoreSee Less

Love riding? Want to improve skills and fitness and do some racing? For experienced riders aged 11-18 (born 2004-2011), Rampage is a junior racing program, focused on cross-country mountain biking. In...
View on Facebook
· Share

RMCC is hiring! Want to teach an awesome group of kids how to road race? RMCC is looking for a Head Coach for our new Road Warriors program. If you are interested in coaching with RMCC please contact admin@rundlemountaincyclingclub.com. For more information about the Road Warriors program, check out our website. www.rundlemountaincyclingclub.com/road-warriors-2/ ... See MoreSee Less

Love road riding? Want to improve your skills, your fitness and do some racing? NEW THIS YEAR: Road Warriors is for those riders age 12-15 who love their road bike and are interested in doing some rac...
View on Facebook
· Share

Posted @withregram • @abbicycle We have an IMPOR

Breaking News! @EastonCycling has joined forces with the Rundle Mountain Cycling Club and is now the title sponsor of the Cyclocross Race. Drie Zussen Superprestige presented by Easton Cycling!

Whether you’re nuts about riding or nuts about bolts, we’re hosting bike enthusiasts looking to experience a weekend of good rides and good times. Cyclocross 2021 runs September 25th-26th! Riders can register at https://zone4.ca/register.asp?id=26618&lan=1&cartlevel=1 and volunteers at https://volunteersignup.org/M3WDH